DANVERS 6, PEABODY 1: Reigning Northeastern Conference MVP Arianna Bezanson had a hand in all six goals, scoring four and assisting on the others as the Falcons stayed perfect at 4-0. Reese Pszenny had a goal and two helpers, Riley DiGilio scored with an assist and Livvi Anderson assisted one while leading a standout defensive effort. Avery Scharffenberg, Mikayla Shaffaval and Gabby Chisholm played fantastic on the back line while middies Julia Vaillancourt and Mia Jordan were also excellent. Holly DeAngelis made nine saves for Danvers while Peabody (1-4) got its goal on a gorgeous 30 yard free kick from McKayla Fisher.

ESSEX TECH 147, GREATER LOWELL 99: Zach Seymour and Luke Thibodeau each recorded 31 points as the Hawks earned their seventh win of the season in dominant fashion. Cameron Colbert added 26 points in the win while Pat Chasse had 24.

The Witches snared perhaps their most impressive win of the season, getting match play triumphs from Ethan Doyle (8-1), who recorded his second straight 33 with seven pars and two birdies, Joe Parr (5.5-3.5), Brady Tremblay (6.5-2.5) and Jon Wasserman (6-3).

SWAMPSCOTT 5, DANVERS 1: Senior captains Fernando Barranco and Vincent Palmer each scored a pair of goals with Palmer adding two assists as well as the Big Blue improved to 3-4 on the season. Jack Fredrickson also had a goal, while Chris Hollenbach chipped in with two assists.

George Nikolakopoulos was first for the undefeated Eagles (4-0) in 17:02 with Charlie Tuttle running 17:06 to edge out BC High’s top runner in a tremendous finish. Paul Lovett (17:16) and Marcus Bussone (17:36) had outstanding runs for the Prep as well.

GEORGETOWN 2, IPSWICH 1: The Tigers had a flurry of opportunities over the final five minutes in an attempt to tie the game, but ultimately came up short in falling to 5-2-1 on the season. Chloe Pszenny, a sophomore, scored the Ipswich goal off a reverse sweep shot, with senior captain Riley Daly assisting. Goalkeeper Morgan Bodwell, a junior, had nine saves for IHS as well. 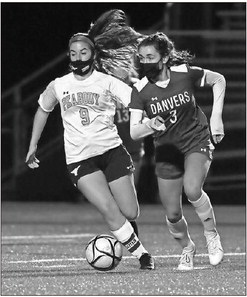 Danvers’ Arianna Bezanson had a hat trick for the third straight game to help her team beat Hailee Lomasney and Peabody.

Click here to see this page in the eEdition: